An asset retirement obligation (ARO) represents the legal commitment to remove certain improvements or modifications to an asset at the end of the asset’s use. The FASB’s ASC 410 Asset Retirement and Environmental Obligations (ASC 410) discusses accounting for AROs. It is routine for lessees to have AROs associated with their real estate leases, through the addition of leasehold/tenant improvements.

Oftentimes with leases of commercial space the lessor will allow the lessee to customize or build out the space to suit their needs. However, the lease agreement will specify that the leased space will need to be returned to its original or some defined condition at the end of the lease term. Common examples of AROs on a real estate lease include when a company builds out leased office or retail space to meet their specific needs, through the addition of things such as:

In this article, we will walk through a specific example of an ARO on a real estate lease and how to record initially, as well as account for any changes. For an overview of accounting for AROs and a non-industry specific example, check out our article, “Asset Retirement Obligation (ARO) Accounting Example under ASC 410 and ASC 842“.

Once an ARO is identified, it is recorded as a liability, measured at the present value of the future total estimated cost, (including the inflation factor), of removal or clean up as of the date the initial obligation is incurred. For example, if it will cost a tenant an estimated $20,000 to remove tenant improvements made to a building in five years, the ARO is initially measured at the present value of $20,000 over 5 years, using an applicable discount rate.

After the initial measurement of the liability, accretion expense increases the balance of the ARO over time from its initial present value to the full cost at the future date of settlement. Accretion expense is recognized each period as an operating expense on the income statement with the offset recorded to the ARO liability.

In addition to the recognition of the associated liability, the costs of removal are capitalized as an asset, which is then depreciated over the life of the contract (or the useful life of the asset if it is shorter).

Sometimes, changes in estimates related to the ARO’s timing or expected settlement amount occur. These are recognized by increasing or decreasing the carrying value of the ARO liability and the related asset. We will cover some of these changes today.

Example: Accounting for an ARO using a real estate lease

In this example, we will walk through accounting for an ARO in Excel, as it relates to a tenant’s leasehold improvements on a rental property.

Below are the additional details related to the estimated settlement cost of the merchandise displays and applicable rates.

To calculate the ARO, start with the projected 1% inflation factor and apply it to the expected settlement cost of $50,000. Inflation is included in the future calculation because the cost of $50,000 is in today’s dollars, so apply a compounding future value formula to come up with a future cost of $54,143. Then, calculate the present value of the expected future lump sum payment using the 5% credit-adjusted risk free rate.

The following entry is made at the time of recognition of the ARO liability:

Additionally, the associated asset is recognized and subsequently depreciated over its useful life of 8 years with straight-line depreciation expense of $4,581 annually. The combined liability accretion schedule and asset depreciation schedule is below. 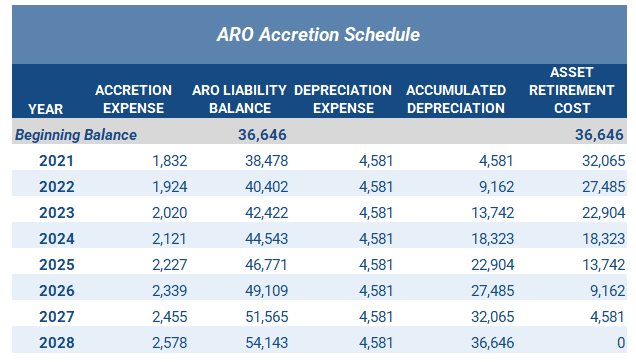 Changes in estimate of amount or timing of ARO liability

If the estimated timing or amount of expected cash flows associated with the retirement obligation change, the ARO liability is adjusted upward or downward, and the associated asset is adjusted by the same amount.

If the change causes an upward revision (increase) in the ARO liability, the credit-adjusted risk-free rate effective at the time of the change is used to measure the new estimate. Upward changes are added as a new “layer” to the existing ARO accretion schedule to allow for the separate interest rates and because the incremental cash flows are considered a new ARO.

Below, we will walk through an example of both an upward and a downward adjustment using our baseline set of facts and the ARO calculation above.

Let’s assume the same facts noted in the above example for the ARO. However, at the beginning of the third year, a change in the cost of labor due to the economic environment causes a change in the estimated removal costs for the merchandise display. The new expected settlement cost is $60,000 which represents a $10,000 increase from the original $50,000 estimated cost. This adjustment represents an upward revision, and will require a new “layer” on the existing ARO liability.

Cat’s Clothing applies the credit-adjusted risk-free rate at the time of the change in cost estimate, which is now 6%.

In order to determine the value of the new ARO, calculate the present value of the $10,000 increase over the periods remaining until removal is required. The change occurred at the beginning of the third year (January 2023) so the additional estimate is discounted over the six years remaining using the current 6% credit-adjusted risk-free rate to arrive at its present value. The inflation factor remains at 1%. The calculated value of the increase is $7,939. This increase is added to the existing ARO as a new layer. In other words, the increase is added to the ARO balance but maintains a separate amortization table from the original ARO as a result of the new discount rate.

Below is the amortization schedule for both the original ARO (left) and the additional layer due to the increase in expected settlement costs (right).

To recognize the upward adjustment to the ARO as well as the accretion and depreciation on the original ARO, Cat’s Clothing makes the following entry at the end of the third year:

This entry is a combined entry for year three. It records both the addition to the initial ARO liability, and also recognizes the accretion and depreciation expense on both the original ARO and the new ARO throughout the year.

Again, let’s assume the same facts noted in the original example for the ARO. However, instead of an increase in estimate, at the beginning of the third year, a change in the cost of labor due to the economic environment causes a reduction in the estimated retirement costs for the merchandise display. The new expected settlement cost for the display at the end of its useful life is $40,000 which represents a $10,000 decrease from the original $50,000 estimated cost.

This reduction is a downward adjustment, and the existing ARO liability and asset must be adjusted to represent the reduction in expected costs. Cat’s Clothing applies the original credit-adjusted risk-free rate applicable at the time of the initial ARO measurement in this calculation, which was 5%.

The present value of the $10,000 reduction using the original 5% rate, over the remaining six years is $7,921. To record the reduction of the ARO settlement cost, the carrying value of the ARO before the change in estimate is reduced by $7,921. At the time of reduction to the ARO liability, a reduction of the same amount is also made to the asset. The new asset value is depreciated based on the remaining useful life, six years.

The amortization schedule below now shows both the pre-adjustment balance, and the reduced balance of both the ARO liability and the asset. 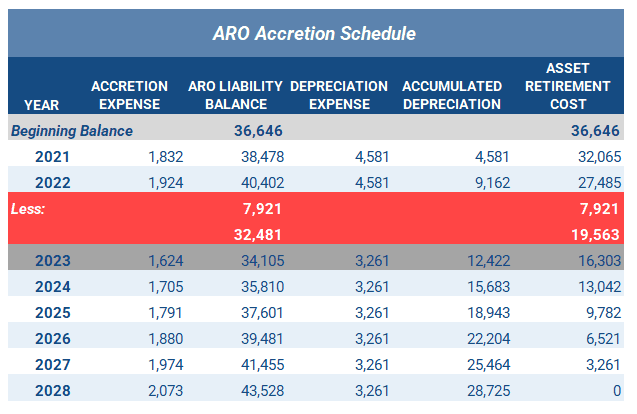 To adjust the ARO liability and asset and to recognize the activity on both throughout the year, Cat’s Clothing makes the following entry:

To recognize the extension of the expected settlement date, calculate the present value of the original settlement cost of $50,000, plus the inflation rate of 1%, over the updated remaining term of seven years (6 years remaining + 1 year extension) using the updated 6% rate. This gives us a present value of $35,652, which is a reduction of $4,751 from the carrying value of the original ARO liability at the end of year two of $40,402.

It is important to note here that just because this example leads to a reduction in the carrying value of the ARO liability, this is not always the case for an extension of the settlement date. The impact to the ARO liability is heavily dependent on the discount rate and inflation rate used at the time of the valuation. 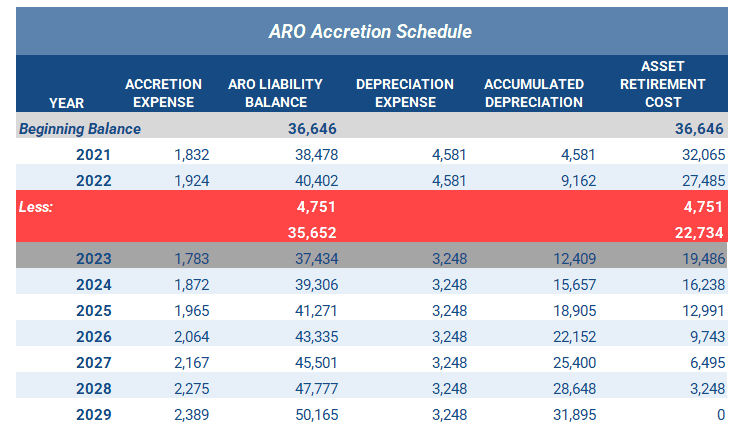 To adjust the ARO liability and asset and to recognize the activity on both throughout year three, Cat’s Clothing makes the following entry:

For our final example, let’s assume the estimated settlement date is shortened by one year, from December 31, 2028 to December 31, 2027. We will assume this still occurs at the beginning of year three (January 2023).

As previously discussed, no specific guidance is available on which discount rate to use when the expected settlement date is the only change. However, whichever approach you use should be applied consistently. Therefore, for this example, we will continue to use the 6% rate applicable at the time the change occurs.

To recognize the reduction in expected settlement date, calculate the present value of the original settlement cost of $50,000 plus the inflation rate of 1%, over the updated remaining term of five years (6 years remaining – 1 year reduction). 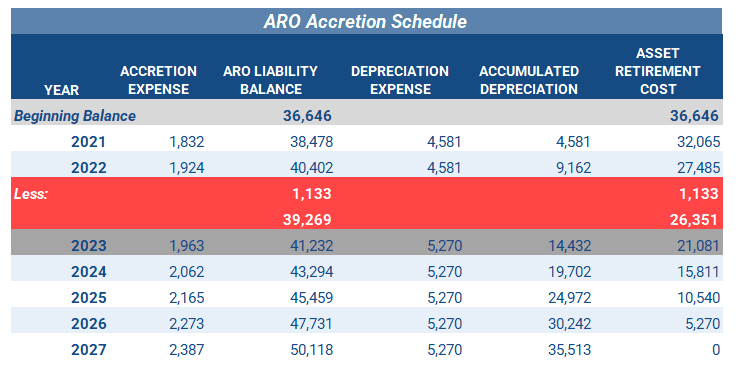 To adjust the ARO liability and asset and to recognize the activity on both throughout year three, Cat’s Clothing makes the following entry:

When leasing real estate space, it is common for AROs to be part of the lease agreement. Understanding how to account for a variety of ARO scenarios properly is imperative. In this article, we walked through examples of how to account for the initial ARO measurement and adjustments required for changes in estimates related to timing or the expected settlement amount. These calculations are complex to manage and track within Excel. Because it can require many schedules to maintain the calculations, errors may be unavoidable. A software solution purpose built for AROs, such as AROQuery, can help companies manage their real estate AROs, and reduce the possibility of manual errors. 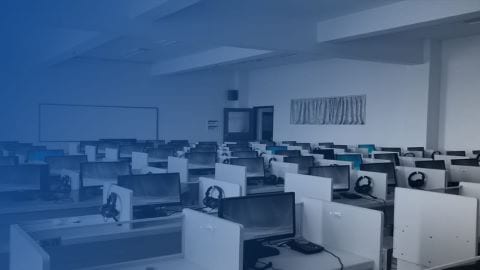 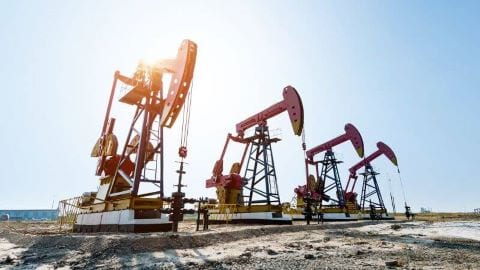